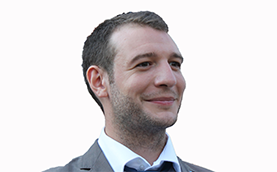 Bram Rouws is a carpenter, cabinet maker and furniture designer from Limoges, France.

He completed his first degree in joinery when he was just 21 years old, then specialized as a Cabinet Maker. Bram afterwards joined the renowned “Tour De France” with the “Compagnons”*, an old guild of professional master craftsmen. During the Tour de France, Bram travelled to various countries where he worked with and for different companies. He followed extensive studies in carpentry and cabinet making and, each year, had to create a masterpiece. Having completed six different masterpieces, Bram was admitted to the Compagnon guild in 2013, where he became a mentor for younger Compagnons over the next two years.

The seven years of Tour de France permitted him to study and practice carpentry, to discover different cities, countries and companies, and to meet and work with a lot of people from different countries and cultures

*In 2010 the Compagnons guild was registered as UNESCO World Heritage.